On first of September 2016 I was one of ten team members of TRADR team which surveyed two churches in Amatrice i.e. San Francesco and Sant' Agostino. Here is my diary about the mission.

The call from Italian fire fighters (Vigili del Fuoco) reached me on Thursday afternoon at 13:36 via email. The project were asked to come to Amatrice with our unmanned ground vehicles (UGVs) and unmanned arial vehicles (UAVs) to provide images and laser data of the two churches and to assess the degree of damage in cultural heritage. The hot phase of the rescue seeking human victims was more or less finished. Amatrice was almost totally devastated by the earthquake and sadly, 232 people died there [1].

Just after the Email several phone calls started, flights from Frankfurt to Rome were booked for the next morning and the robots had to be packed. That was quite difficult to organize: My colleagues Rainer Worst and Erik Zimmerman were in Munich for a flight training at Ascending Technologies. Two robots and the infrastructure equipment were on the way back from the summer school [2] and not available. So, Vaclav Hlavac from Czech Institute of Informatics packed his robot into his car and picked up Vladimir Kubelka at Munich since he was also at the flight training. Ascending Technolgies packed two Falcon drones and for Wolfgang Rottner and Kresimir Dullic. They took Erik and went with a van to Rieti / Italy which was about 60 km away from Amatrice and was our meeting point. From the Italien side Luigi Freda, Mario Gianni and Valsamis Ntouskos joined the team. They also had one ground robot and bought a new Phantom 4 as a cheap reserve drone. They organized all the local stuff very well. The team was completed by Ivana Kruijff-Korbayova, our TRADR project leader.

Flying from Frankfurt to Rome was difficult especially on Wednesday 31.8.2016 [3]. The Airport had a security breach and we (Ivana and me) started to Rome at 16:50 instead of 12:20. Mario picked us up at the airport and drove with us to Rieti where we arrived around 21:00. Our colleagues that travelled by car also arrived within the next hour and we finally had our first briefing. The plan for the next day was to wake up at 5:30 am, pack everything and leave Rieti at 6:45 am. Our mission should start at 8:00 am and finish at 6 pm. At midnight everybody went to his room to do some final setup e.g. prepare robots, charge batteries and then tried to sleep.

The next morning we followed our plan and left Rieti after an italian breakfast with all our equipment in time and reached Amatrice at 8:00 am. We met our mission commander Emanuelle Gissi who briefed us about the current situation. Until our mission started they had about 3000 waves after the main earthquake. The last bigger wave took place at 5:30 in the morning. Safety is the first and main goal in the red zone and we had to follow the commands of the fire fighters strictly. In Mirandola at 2012, when we had a one week mission with the robots in the Nifti project, the fire fighters lost two rescuers during a second wave. But fortentatively not at Amatrice which shows the great work of the rescuers.

Our first mission was at the Church of San Francesco. We were asked for indoor and outdoor 3D models. So, the fire fighters took us together with all the equipment to a save zone in front of the church and we started the preparation. The Falcon drones from Ascending were immediately ready to fly and just started first sorties.

Preparation of the ground robot needed about one hour. Then it could enter the churches during a side entrance. I took a look at the Phantom. Mario had already charged the batteries but as it came out of the box it needed two firmware updates for the drone and two for the remote control. Fortunately we bought some Internet flats so I could download the updates and install them, but that needed some time which left me a bit nervous since time was running. At 10:48 everything was ready and I started a first sortie. Two circular point of interest flights over San Francesco with a radius of about 35 meters at a hieght of 28 and 35 meters. Using the high resolution images (36 Mpix) from the Falcon drone we searched for possible entrances, but only the front window seemed to be suitable. The front windows was the largest entry but, unfortunately it was blocked in the middle by a wire. So, what to do? Trying to go inside with the 20.000 Euro Falcon drone seemed to risky so we gave the Phantom a second try. We were not sure how the phantom would behave when it looses the GPS signal while entering and what would happen with the height control when it changes from 8 meters to a few centimeters and back. At 12:45 I started the flight to enter San Francesco through the window. Everything worked well. I could enter and fly about 10 minutes inside the church! Yeah! Nevertheless flying was really hard since we continuously lost the video connection and had a horrible delay of the image transmission of about 1 second. Following our goal to build 3D models I tryed to fly side trajectories to get a good baseline for the structure for motion and multi view stereo algorithms. Simultaneously, the fire fighters who were looking over my shoulder wanted to have good images of the wall paintings and the damages. Good that DJI increased the flight time of the Phantom 4. Furthermore I recorded some images of and for the ground robot which simultaneously did a 4 hours recording of images and laser scans in the church. After 12 and a half minutes I left the church again through the window and we could hand out the image and video data directly to the rescuers. When I landed I recognized that my hands were trembling and that I was soaking wet. During the flight I felt like in a tunnel: Only concentrating on the mission and realizing what happened around me. Relaxing, drinking and eating brought me back in the horribly destroyed town and made me sad in spite of the successful sortie.

Nevertheless the first church was inspected and we packed our equipment and moved to the second church Sant' Agostino. The equipment was transported by the trucks of the fire fighters that had to move around Amatrice which needed about one hour. In principle everything the distance is only 300 meters, but everything was blocked. We walked in a chain, with fire fighters at the front and at the back, through the red zone from one safe point to the next and again we recognized the terrible degree of destruction.

Coming to Sant' Agostino we observed a lot of people. A press point was directly besidde the church. So the next sorties would be carefully observed which did not make it easier. The Falcon drones started first to provide high resolution images from the outside. A hole in the roof was carefully inspected. This hole was definitely to small for the Falcons. But could we enter with the Phantom? We discussed some strategies and came up with an audacious plan. To enter the church first we had to overcome the wall and directly behind it we had to go down to avoid colliding with the wood of the hammer beam roof. Without an external view this was not practicable. so we decided to use all our drones with 3 pilots and a flight commander simultaneously. Wolfgang and Kresimir flew the two Falcons and provided the external view. I piloted the Phantom and Erik coordinated us. It seemed like a kamikaze mission for the Phantom but it also seemed the only way and the Phantom was not really expensive. At 16:23 we started our sortie. Everybody was fully concentrated. And we did it! Erik commanded Wolfgang and Kresi to the top and side and I flew over the wall and down under the wooden beam into the church following only the voice of Erik. The Sant' Agostino church seemed to be more destroyed and smaller than San Francesco. Furthermore it had several candlesticks at each side which made the flying dangerous. Again I did a 12 minutes flight and captured as many images as possible. We went out the same way as in with the wonderful views provided by Wolfgang and Kresi. When I went out we got a lot of applause from the team and the fire fighters for that spectacular human / drone team work. For me both indoor flights were my most exciting flights in my resarcher and drone pilot career. A great experience.

After handling the data to the fire fighters and after charging the batteries I started at 17:47 for a last sortie. It was just a simple 3 circle POI flight over Sant' Agostino to capture some data for the 3D outside model. The whole mission ended at 18:00. We packed our equipment and again the fire fighters brought it back to our cars. The team took some group pictures and our project coordinator Ivana gave some press interviews. At around 19:00 we had a larger briefing with Emanuelle who gave us very useful feedback about the mission and the project. He was very happy with the work we did and the material we provided. We left Amatrice when it got dark again through the red zone in a chain from one save place to another. Again really horrible. Around 22:00 we arrived back in our Hotel in Rieti and Luigi organized a wonderful dinner in a fish restaurant. After midnight we tried to sleep (more or less) after such an eventful day.

On Friday our plane was scheduled at 18:10. So we had some time to process our data. I used the two POI flight with the DJI to quickly produce a 3D textured outside model which we sent to the Vigili del Fuoco, the Italian fire fighters. Better outdoor models as well as the indoor models were computed later at the weekend by the TRADR team and given to Emanuelle. On schedule we reached our plane back to Germany and arrived at Frankfurt in time.

It was a great life experience being part of the TRADR team that successfully deployed two UGVs and three drones in Amatrice. We were lucky to work with the Vigili del Fuoco. They were doing a terrific job in Amatrice. After the earthquake of August 24th, the Vigili del Fuoco tirelessly worked in order to find and safe lives from debris and provide a crucial support to the people of Amatrice.

A youtube video of the mission can be found here

[3] All clear at Frankfurt airport after security breach 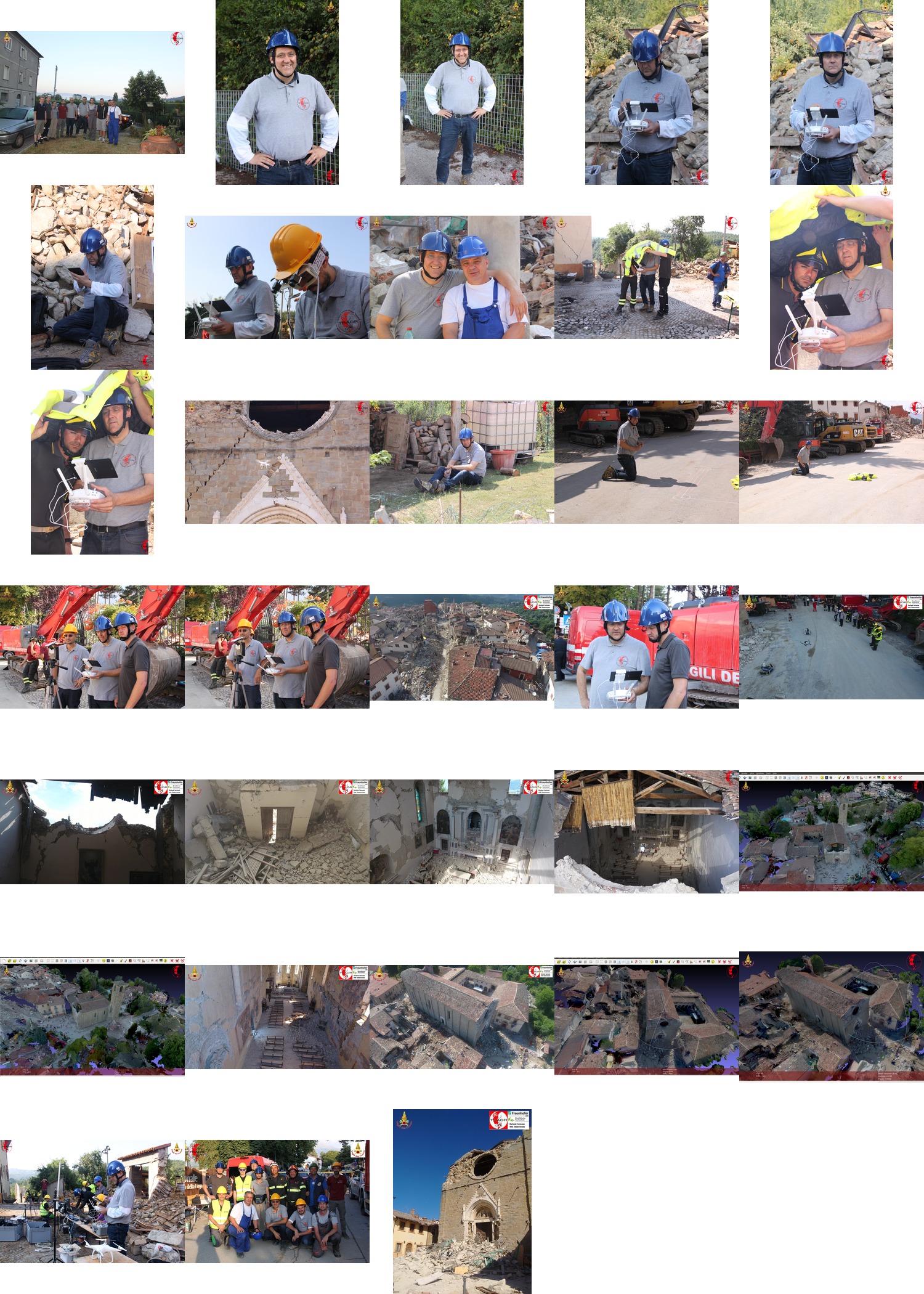